One of important philosophical problems in environmental philosophy is the existential relation between man and nature. This mirrors the earlier relationship between man and nature as God’s creation. The core principle here is relationality. Man and nature in modern thought are considered as separate substances with an abstract relation between the two. These divisions which emerge with Modern thought operate on the basis of rational distinctions and the attempt to substantiate and verify. Such an approach often isolates Nature as a distinct region of being, where nature is divided into parts and analyzed in isolation. With such analysis and reduction, the interrelationships and interconnectedness among beings as well as among parts of the whole disappear. As a result, nature is considered as a big machine, and being is treated as a static substance. Many modern Western philosophers consider being as merely as a nominal concept. Contrary to this mainstream modern thought, the philosophers Mullā Ṣadrā and Whitehead hold that nature as well as the entire corporeal world is a substance in a continuous process of change and becoming. For Mullā Ṣadrā, nature in essence is a process of ‘trans-substantial motion’ (al-harakat aljawhariyyah). This principle is derived from his reflection on the univocal meaning of being that brings about his fundamental doctrines, i.e, the principiality of being (aṣalat al-wujūd) and the gradation of being (tashkīk al- wujūd). For Whitehead, the actual world is a process of becoming of actual entities. In accordance with his philosophical system, to explicate his thought, Whitehead coins the term of ‘actual occasions’ to denote all beings in the corporeal world. He rejects critically the mechanistic viewpoint of modern thought. This paper attempts to introduce several basic principles from Mullā Ṣadrā and Whitehead to provide an alternative philosophical foundation for the environmental movement. 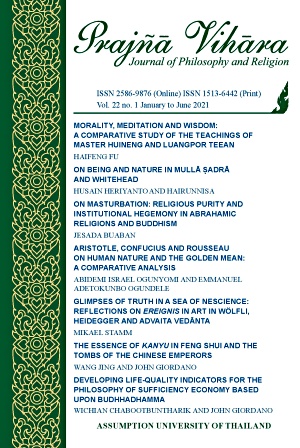 Consent to Publish and Transfer of Copyright
By publishing in Prajñā Vihāra, the author agrees to transfer and assign to Assumption University of Thailand as the Publisher of the Journal, the copyright to the Article in any form, including any and all rights, interests and claims related to it.

The author does retain the following rights:

The author must also guarantee that: